This week, I get to launch a Kickstarter for a new comic. Vaguely exciting if not particularly auspicious you might think, but for me, it’s a big moment in a year that most of you will know has been pretty wild for me health wise. Checks, results and tests are continuing to go well as I recover from the organ failure that nearly had me wearing a toe tag a few months ago – I’m still in clinic and on loads of drugs etc. but I’m generally doing well and have become used to this being part of my life now. In fact, it won’t be long until I’m well enough to go back to work proper (boo).

In the meantime, I have a new comic for you launching on Kickstarter on Friday 26th July, HEART OF STEAL #1 made with the all-star team of Katie Fleming (Art) Rebecca Horner (Colour Art) Hassan Otsmane-Elhaou (Lettering & Design) and Harry French (Script Editor).

Heart of Steal is a brand new action/crime caper comic about three estranged friends who find themselves on a collision course following an audacious robbery. It’s a story about loyalty, friendship and ambition in a World where the rules have been turned upside down.

Desperate to save her dying brother, teenage cat-burglar Toni Doinel steals the only transplant heart available in the sprawling moon metropolis of Alpha City. However, the heart belongs to a notorious gangster, who’s not about to give it up without a fight!

Toni’s daring heist puts her on a collision course with two estranged childhood friends, gang lieutenant Michael Roche and city cop Oscar Navarro. In one crazy night, Toni, Michael and Oscar will discover what they are willing to risk for family, clan and aspiration in a city where you carve out your stake any way you can! 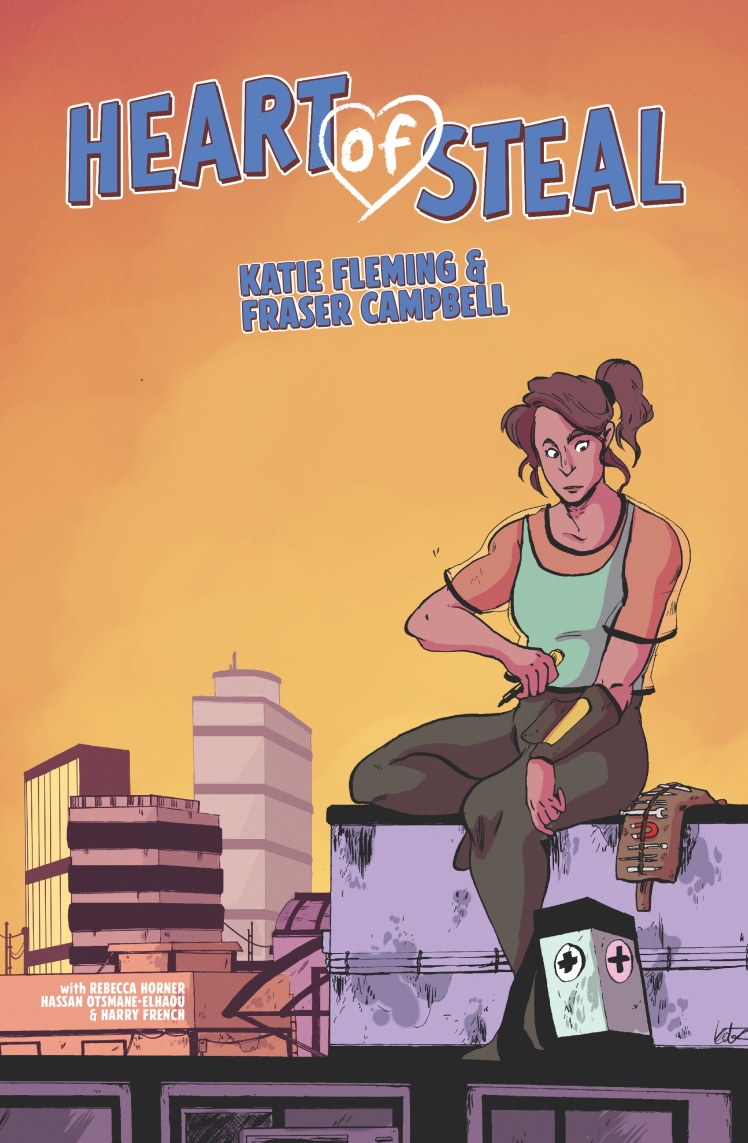 On the surface, I suppose Heart of Steal could be described as a departure for me in terms of writing style. I’m better known for the existential density of Alex Automatic or the surreal “bizarre noir” of The Edge Off. While Heart of Steal ain’t exactly what you’d call breezy, it does have a lighter tone than anything you’re likely to have seen of mine so far with a focus on central themes like friendship, family, loyalty and love. It’s a freewheeling, big adventure with (hopefully) as many laughs as there are thrills, featuring some characters you’ll grow to love and root for, despite their many flaws and competing agendas. So why did I write it?

Well, it started off with a desire to write something my kid could read and enjoy. She was maybe 14 when I began Heart of Steal and even with the best will in the World, she wasn’t going to be interested in Alex Automatic, with its basis in 60s/70s spy fiction and stylistic tone borrowed from decades-old TV shows like Joe 90, Danger Man and The Prisoner. It’s probably safe to say that goes for a fair proportion of the general comic buying public too. I’m very proud of the stuff I have out so far, but I get it’s not for everyone – so why not try something that might have a bit of a broader appeal?

That might sound a little cynical and it would be, if this kind of story didn’t feel like it came just as naturally to me. It’s me channelling my love of big-hearted adventure anime, TV shows like Firefly and Veronica Mars as well as great, character-driven comics like Bandette, Stumptown, Jessica Jones, Giant Days and Saga. I genuinely love this kind of story. Good people in a bad situation. A story where you get to create a bunch of characters you really like and then test them to their absolute limits. A brand new and distant World where having scruples ranks second to survival and the weight of your personal choices means that sometimes, friends aren’t always something you can afford. Heart of Steal may seem a little different from my work so far, but feels every bit as much a part of my wheelhouse.

And the real pleasure is that I get to work with amazing collaborators to bring it to you. Katie’s dynamic, vivacious art blends perfectly with Rebecca’s bold, playful colours, creating a city with hints of darkness but with a look a million miles away from your typical Sci-fi dystopia. Hassan’s often hand-created sound effects has the action flying off the page, pulling you deeper into the story. And the tale itself is ten times tighter after the input of script editor extraordinaire, Harry French.

I keep saying it, but collaborating with other talented people and honing a story into something greater than the sum of its parts is really one of the great joys of comics. It would certainly be easier on my production budget if I could do everything myself and I’m not knocking people who make comics on their own at all, but there’s just something so special about getting stuff back from a collaborator and seeing that different take, that unique stamp that you could never have envisioned.

We launch our funding Kickstarter on Friday 26th July and we have a load of cool reward levels, such as prints, commissions, original art and even the chance to appear as a character in the next issue of the comic. I’m grateful to be in a position to get it out there and very proud of the results. We’re planning this to be a 4 issue mini-series, so we hope you like it as there will definitely be some more! Hope we can count on your backing come Friday!