Very quick update on my dodgy health. It’s pretty much all good news. Although my kidney function remains pretty low, it’s been improving as has my general health, stamina etc. Things could dip of course, and I’m still attending weekly clinics and taking a lot of medication, but generally, the only serious (ish) issue that remains at this point is how I am experiencing taste. Lots of stuff I used to enjoy (including drinking plain water) now tastes pretty ropey and I can’t really taste hot food at all (all I taste is “hot”) so that’s weird but I’m gradually finding stuff I enjoy. Most of the stuff I can’t eat anymore is crisps, cakes, biscuits and other garbage, so it’s probably no bad thing I’m off that kind of stuff. 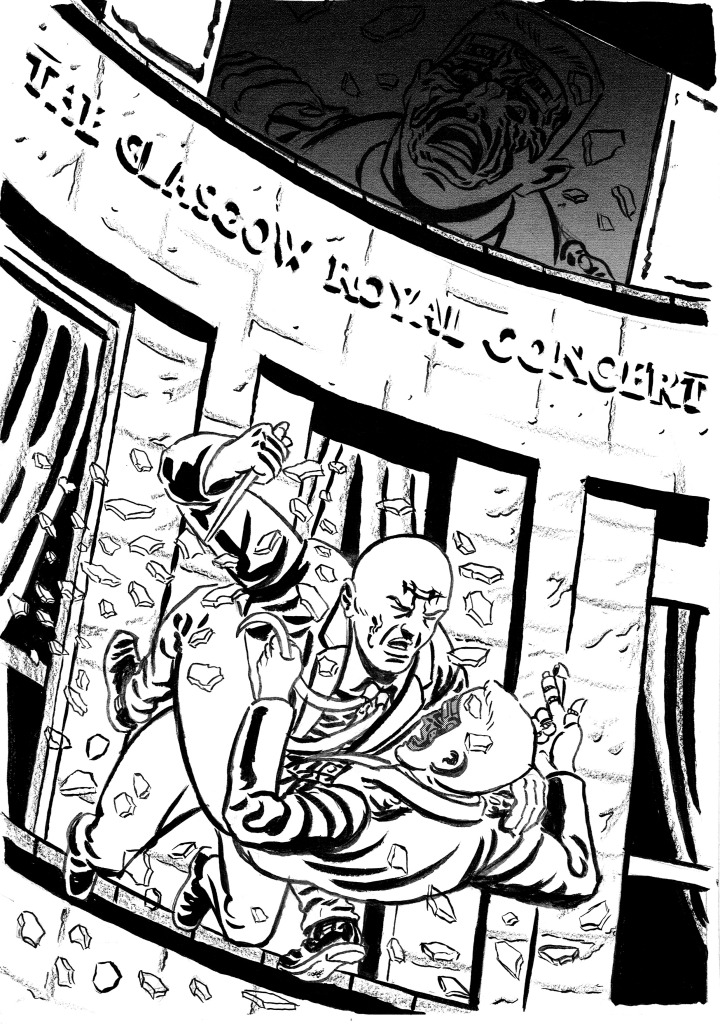 I’m still off work and will be for a while yet. Mainly because I’m on strong immunosuppressants so don’t have much of an immune system, which makes working in a normal office pretty dicey until I’m prescribed something a bit less powerful. Also, I’m much better but still feel very much like I’ve been run over by multiple trains. My main issue these days is dealing with boredom and just getting fed up with my own company. Thank God for comics. Thanks to everyone who even now is still checking in and see how I am, it’s really appreciated.

The Con is on!

It’s coming up on one of my favourite weekends of the year, Glasgow Comic Con. Conceived and started by BHP head-honcho Sha Nazir and now run by my brilliant pal Nicola Love, the con is now 9 years old and has been the best thing to happen to comics in the area since the great GLASCAC Conventions of the 90s.

Why? Well, not only do they have top class international and UK guests from the very top of comics, like Al Ewing, Frank Quitely, Chip Zdarsky and Brian Stelfreeze, it’s one of the few indie comics focussed conventions in the entire country. With many top talents coming up from different parts of the UK to augment a wealth of Scots talent (hiya), you won’t see a line-up of indie flair like this to my mind outside of Thought Bubble. So, if you have any interest at all in the thriving and almost obscenely healthy UK indie comics scene, attendance is a must. 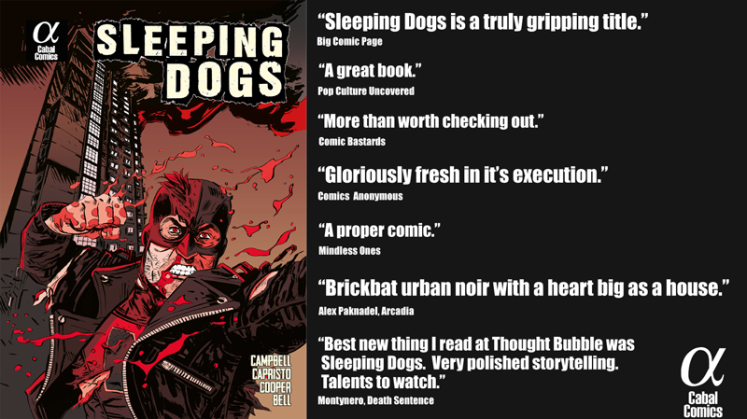 I am delighted to say that I will be well enough to be there, at Table 48 in the Lomond Foyer. That is thanks in large part to my pal Iain Laurie who is doing me the immense solid of coming along to help me and spend the day at the con. If you know Iain, you might be aware that cons aren’t really his thing, so I’m humbled that he’s given up his day to help his crocked old pal enjoy an event I’d probably have struggled to attend on my own. 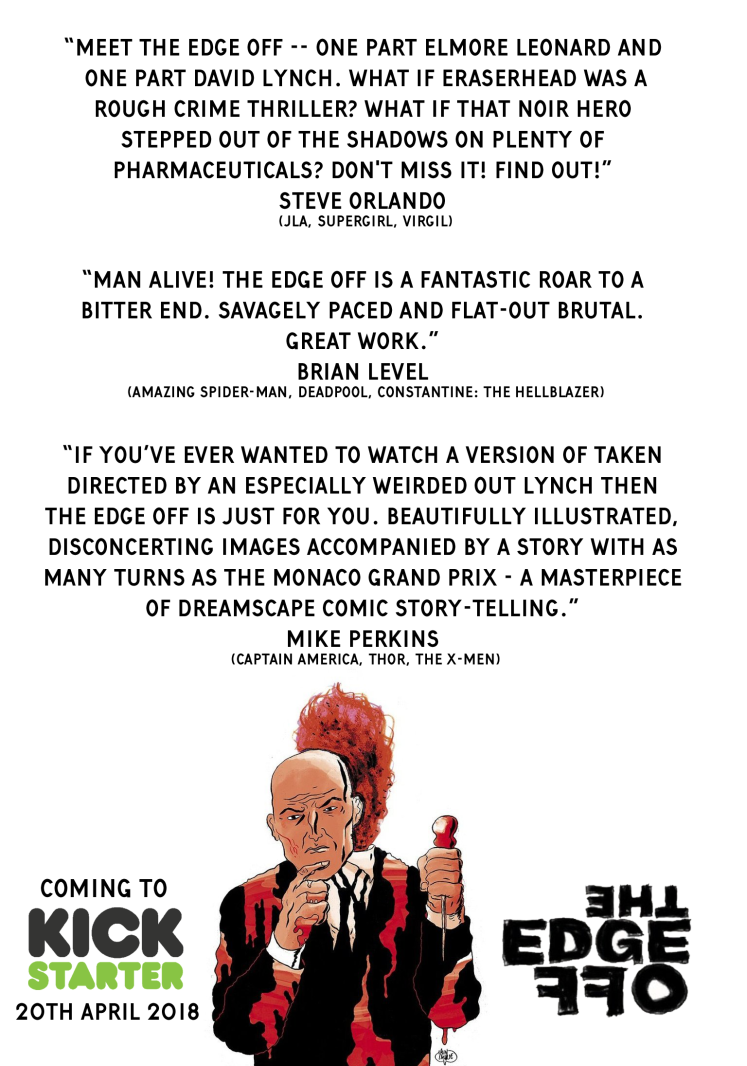 As I’ve noted before, almost the whole team behind THE EDGE OFF will be around, including David Cooper right next us, Colin Bell on a roving mission and of course Mr Frank Quitely (artist behind one of our sensational hit variant covers, alongside the brilliant Garry Brown), one of the featured guests. So, a rare chance to get your copy signed by pretty much everyone involved. 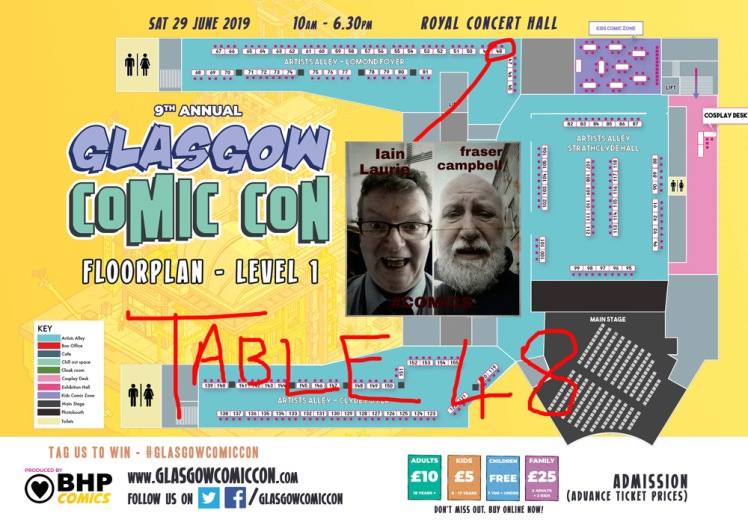 We’ll also have Alex Automatic #1-3 plus something new to the convention, the stand-alone Alex Adventure “Prefect 63”. I also have nice new copies of my first comic, Sleeping Dogs. Comics are available individually of course but we’re also doing something a bit special, a bundle offer which can see you waltz off with everything we’ve published so far for £20 (physical) or a mere fiver (digital). No cash? I can take you payment by card now, thank you very much. What a total pro. As well as all that, I have a very few copies of Brawler #1, a fine new anthology comic featuring an all new story by me and James Corcoran. 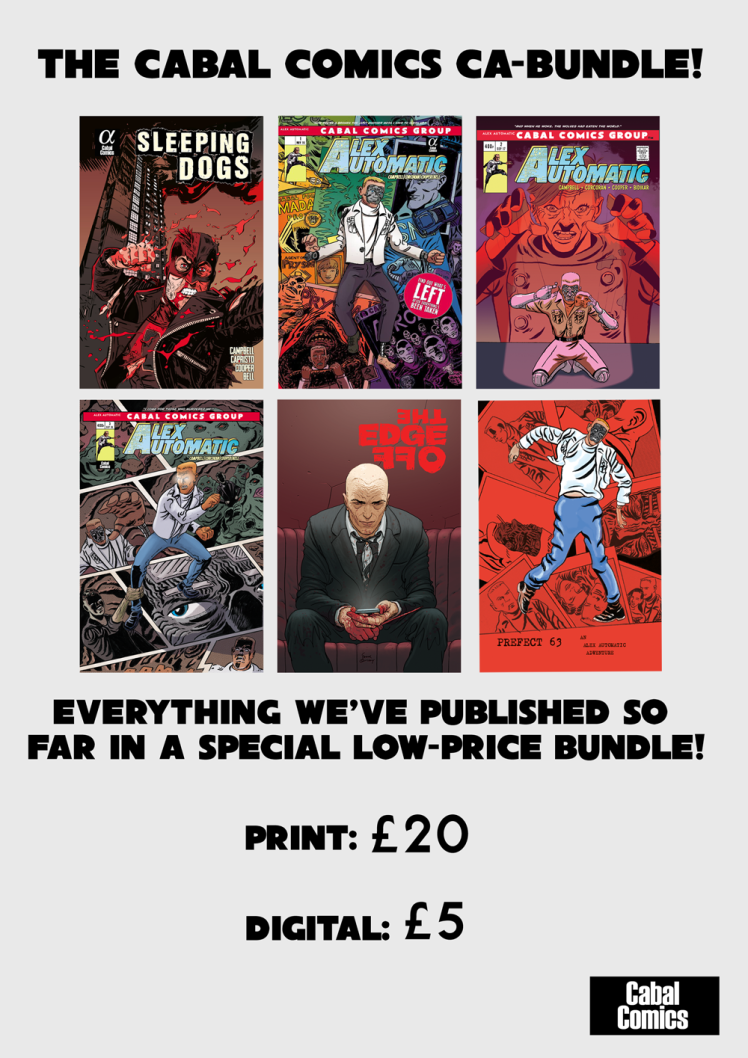 So, join me, Iain and incredible talents like John Lees, Chris Baldie, Neil Slorance, Paul Tonner, John Grieve, Kristyna Baczynski, Heather Palmer, Allan MacRitchie, Nick Gonzo, James Lawrence, John Felix, Steven Ingram, Madius Comics, Fraser Geesin, Dan White, Metaphrog and loads of others for a glimpse at the breadth and depth of styles approaches and themes spawned by our fantastically versatile comics scene. And if that’s not your thing? There are loads of panels, dealers tables, cosplay and as I mentioned, a slew of top guests. Genuinely can’t wait to see you!